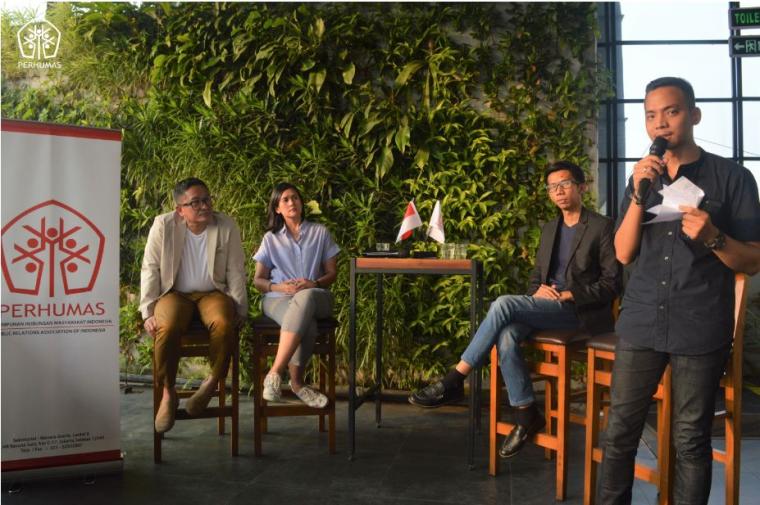 In the Industry era 4.0 which is closely related with the digital world, from AI (artificial intelligence) until to IOT (internet of things), it will certainly change the behavior and human mindset.

Evi Andarini as Corporate Communications Manager Bukalapak added “Nowdays everything is fast, instant, and easy. Like accessing the news in seconds, unlike the days of newspaper and magazine media, also in terms of fulfilling daily needs, all at the touch of a finger through a gadget you can shop easily through a marketplace without having to go out of the house”.

The Head of the Development Division of the PERHUMAS Branch Management Board represented by Chairperson, Mr. Tarsih Ekaputra confirmed the management of the Greater Jakarta of the Youth PERHUMAS. The young Public Relations organization is expected to be a pioneer in voicing the goodness of Indonesia among the millennials, especially in the Greater Jakarta Region (Jakarta, Depok, Tangerang, and Bekasi).

Mr. Tarsih Ekaputra said, The Industry 4.0 involves machines in making and distributing information and needs special attention to maintain the integrity of information.

“These young figures will later be the vanguard in maintaining the integrity of information through tools that they are in control of,” said Mr. Tarsih Ekaputra. Furthermore, Mr. Tarsih said that the Greater Jakarta of the Youth PERHUMAS brought a mission to echo the #IndoensiaBicaraBaik campaign.

PERHUMAS conveyed condolences for citizens of the natural disasters that have befallen several areas, one of them is the earthquake and tsunami in Central Sulawesi which has claimed many victims and destroyed various infrastructures. They granted fundraising from the proceeds from the provision of part of the event ticket revenue through the Dompet Dhuafa with non profit organization.