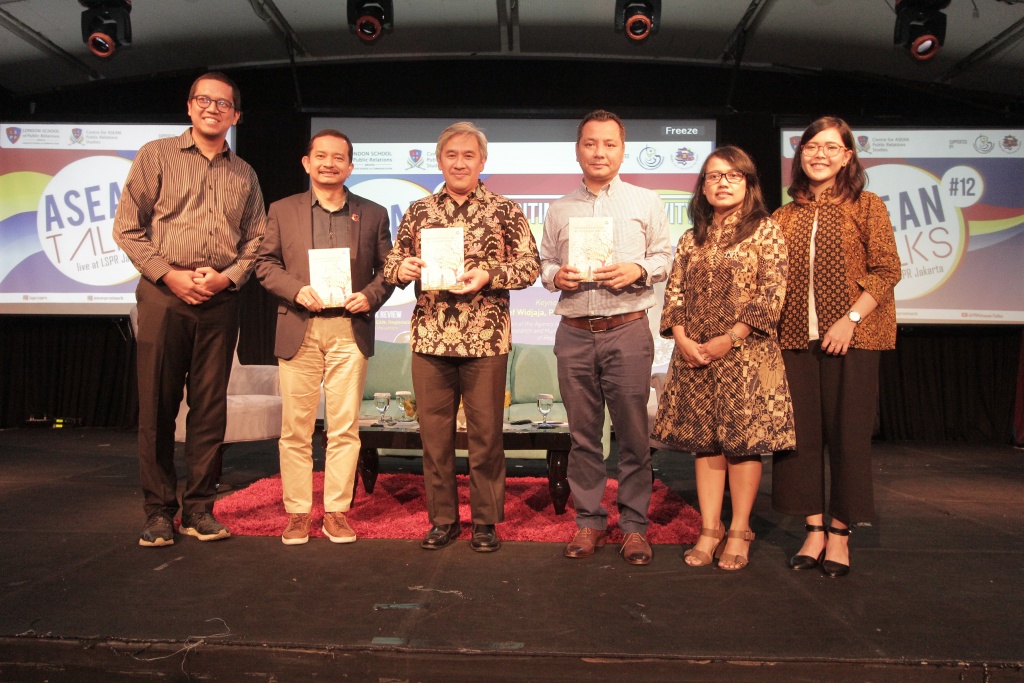 Token exchance and take photo together 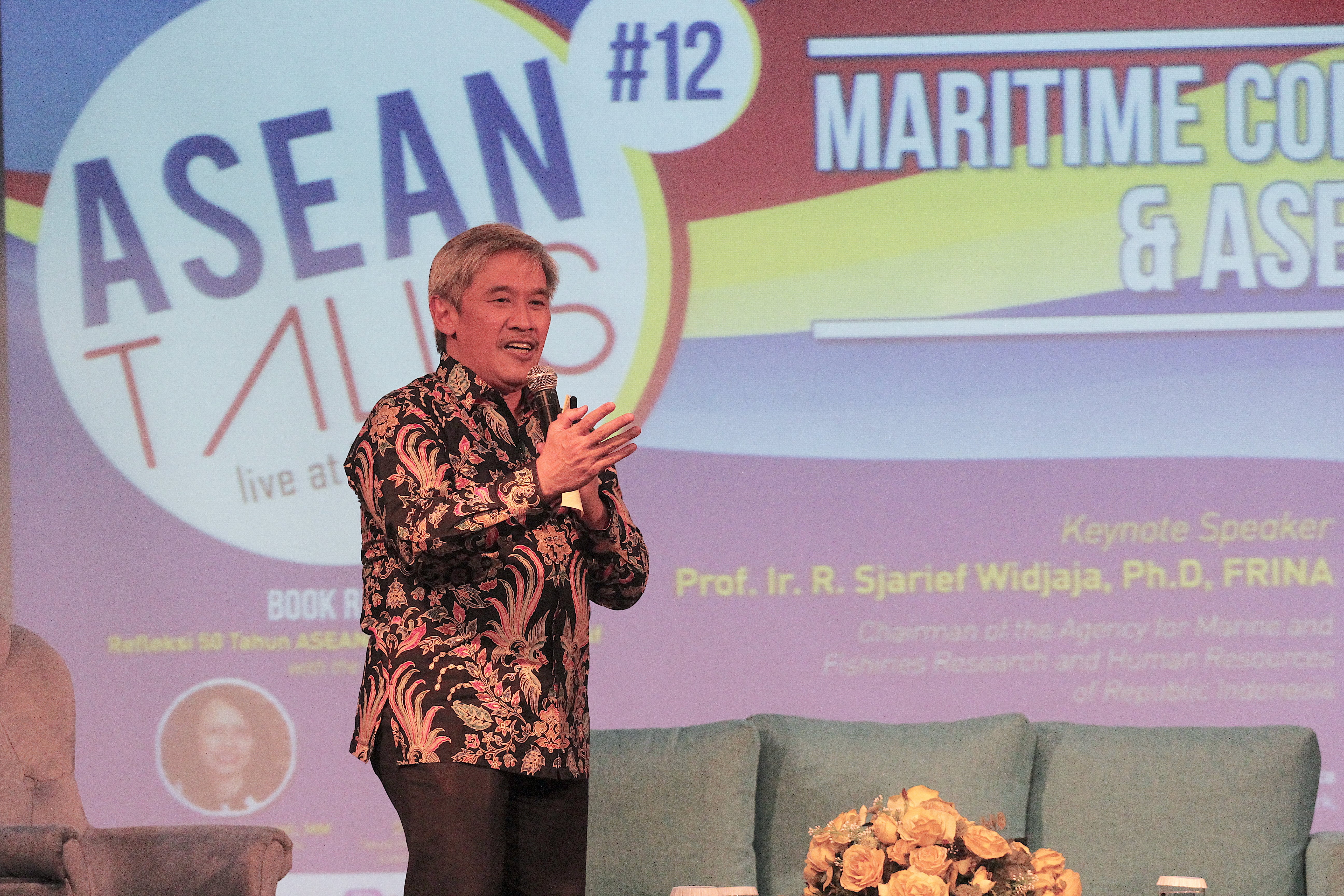 In front of hundreds of students, management, lecturers, and professionals, Prof. Sjarief Widjaja conveyed that the potential of Indonesia’s marine resources 80% industry along with the 75% of Indonesia’s major cities are placed in coastal regions. Indonesia is world widely well known as the world’s largest Marine Mega Biodiversity due to its 5,500 fish species (37% of the world’s fish species), 555 seaweed species, as well as its 959 coral reef biota.

Prof. Sjarief Widjaja also told the audience that Indonesian fisheries potential is increasing along with the ongoing eradication of foreign fishing vessels. In 2013, our marine fisheries potential was around 6.5 million tons and it rose to 12.54 million tons in 2017. This reflects one of the positive effects of the departure of foreign ships and provides an opportunity for fish to regenerate again. Prof. Sjarief Widjaja emphasized that 14 of 47 ports that will be developed for ASEAN connectivity in Southeast Asia, are located in Indonesia. This means 29.7% of the various ports incorporated in the connectivity port scheme for the ASEAN region are located in Indonesia, so the readiness and competitiveness of the various ports must be increased. Some of the 14 ports are Belawan, Dumai, Tanjung Priok, Tanjung Emas, Tanjung Perak, etc.

Prof. Sjarief Widjaja also mentioned that the Ministry of Maritime Affairs and Fisheries encouraged local wisdom in managing the potential of fisheries in Indonesia, for example the Regional Government in Bali made a Government Regulation (Perda) regarding protected fish, while the Regional Governments in Central Java and East Lampung made Local Regulations about the Rajungan. In addition, the Ministry also encourages LSPR students who are present to become entrepreneurs in the fisheries sector to encourage the utilization of Indonesia’s fisheries potential. 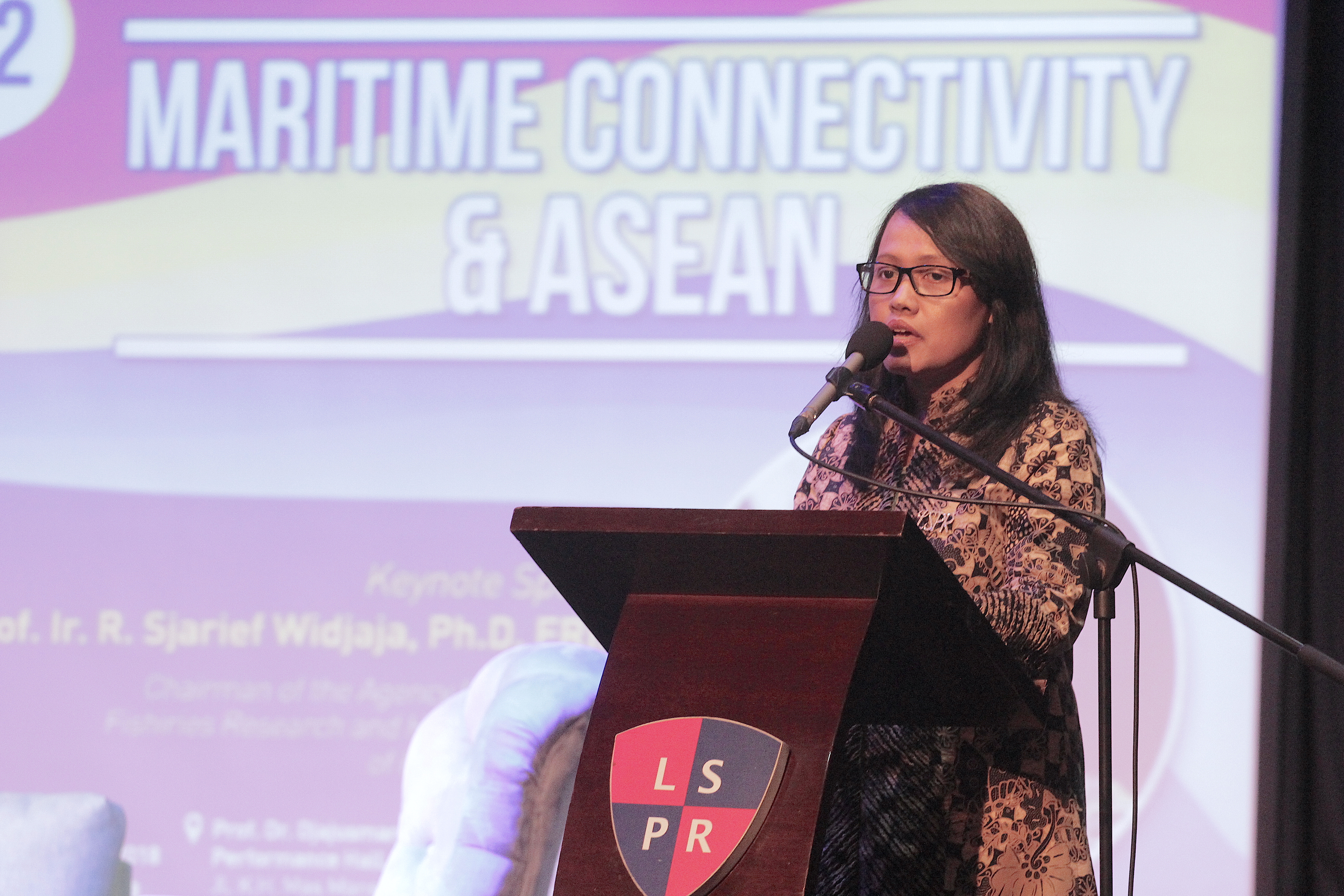 According to the Head of CAPRS, Yuliana R. Prasetyawati, MM the event was held as in the form of support for the government’s vision to realize Indonesia as the world’s maritime axis. LSPR Jakarta as a higher education with competencies in communication, is challenged to contribute by educating the younger generation (known as the Golden Generation) of ASEAN to have a better understanding of Indonesia’s maritime potential in order to make maritime a part of our nation’s culture.

Connectivity plays a really important role in accelerating economic integration between ASEAN member countries. One of the achievements of ASEAN cooperation in the maritime field is the creation of a Master Plan on ASEAN Connectivity (MPAC) in 2010 and applied in 2016 until 2025 in infrastructure development and maritime facilities form. Therefore, it is necessary to synergize regional infrastructure by planning between ASEAN member countries. 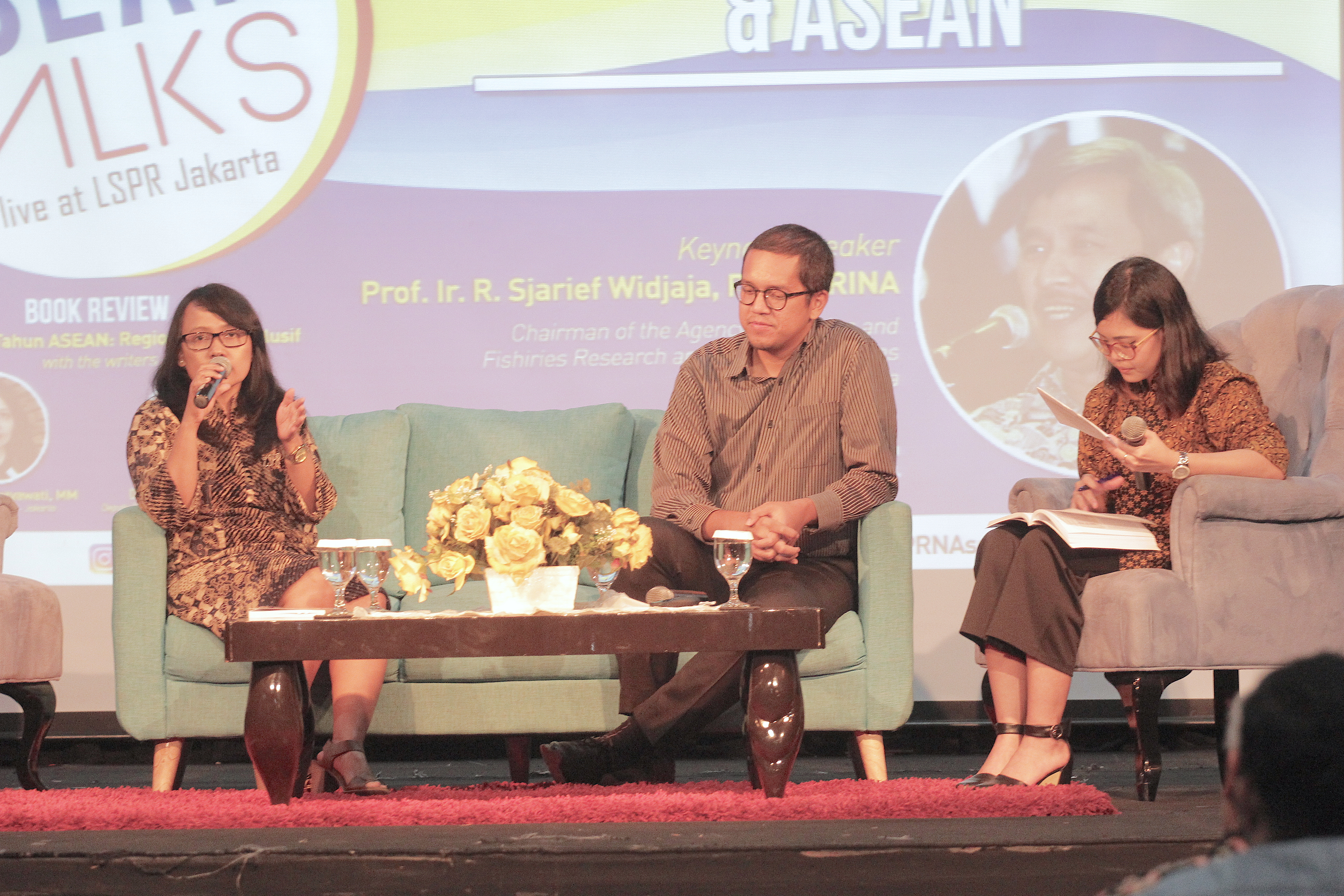 Book Review Discussion with the Writers

There was also a Book Review entitled “Refleksi 50 Tahun ASEAN: Regionalisasi Inklusif” with the writers; Yuliana Riana Prasetyawati, MM as the Head of CAPRS and Dr. Verdinand Robertua, as the Deputy Dean of the Faculty of Social and Political Science, UKI, also a lecturer of LSPR Jakarta. The book was made to commemorate 50 years of ASEAN formation. Filled with 9 articles from 9 different writers, this book talks about many aspects of ASEAN; diversity of natural, cultural, linguistic, structural, political and economic wealth in Southeast Asia for all ASEAN communities. With this book, the writing team encourages the development of ASEAN in science relations to grow rapidly. ASEAN will face increasingly complex problems and the science of International Relations in Indonesia must seek identity and identity in the discourse of the theory of International Relations which is dominated by the thinkers. 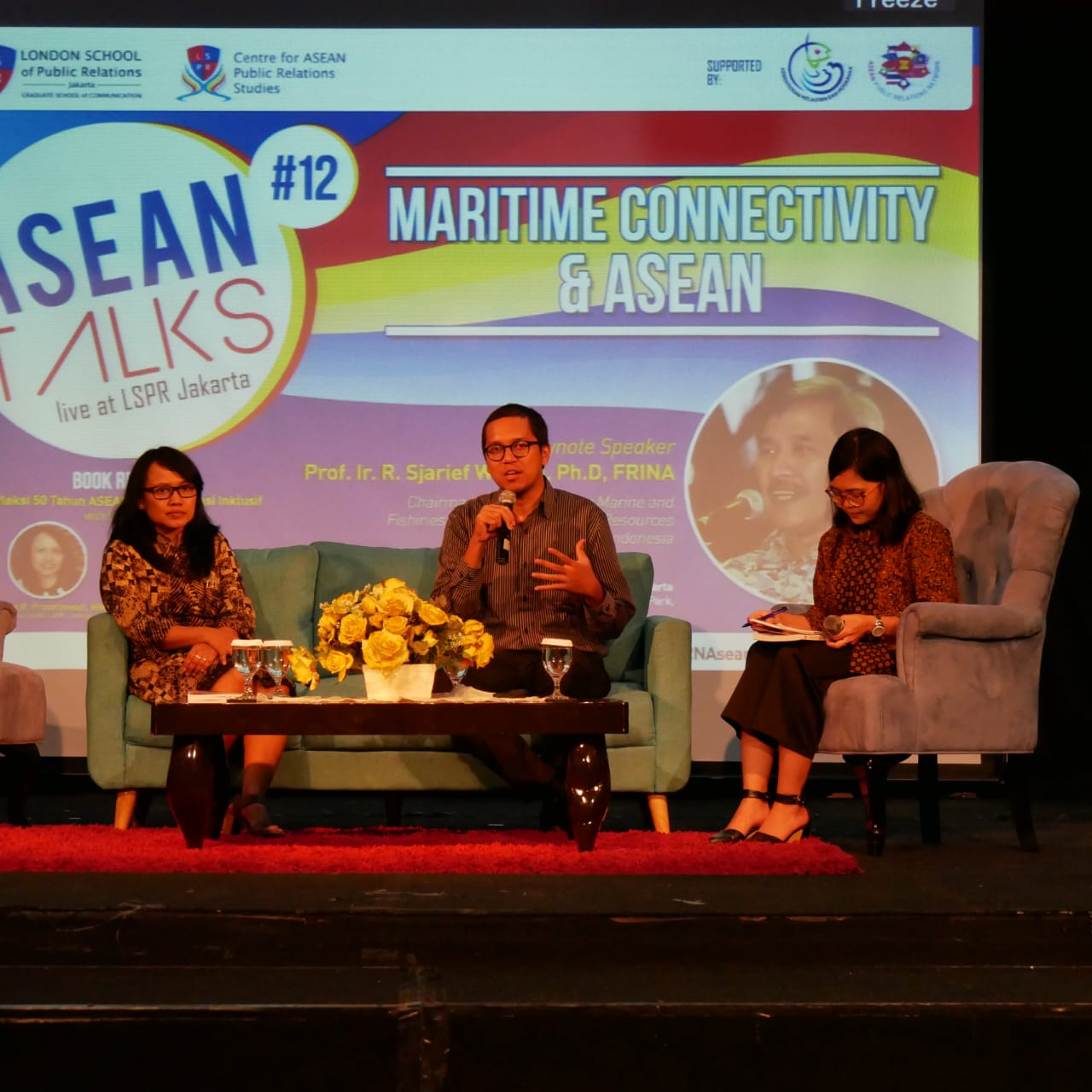 Book Review with the Writers 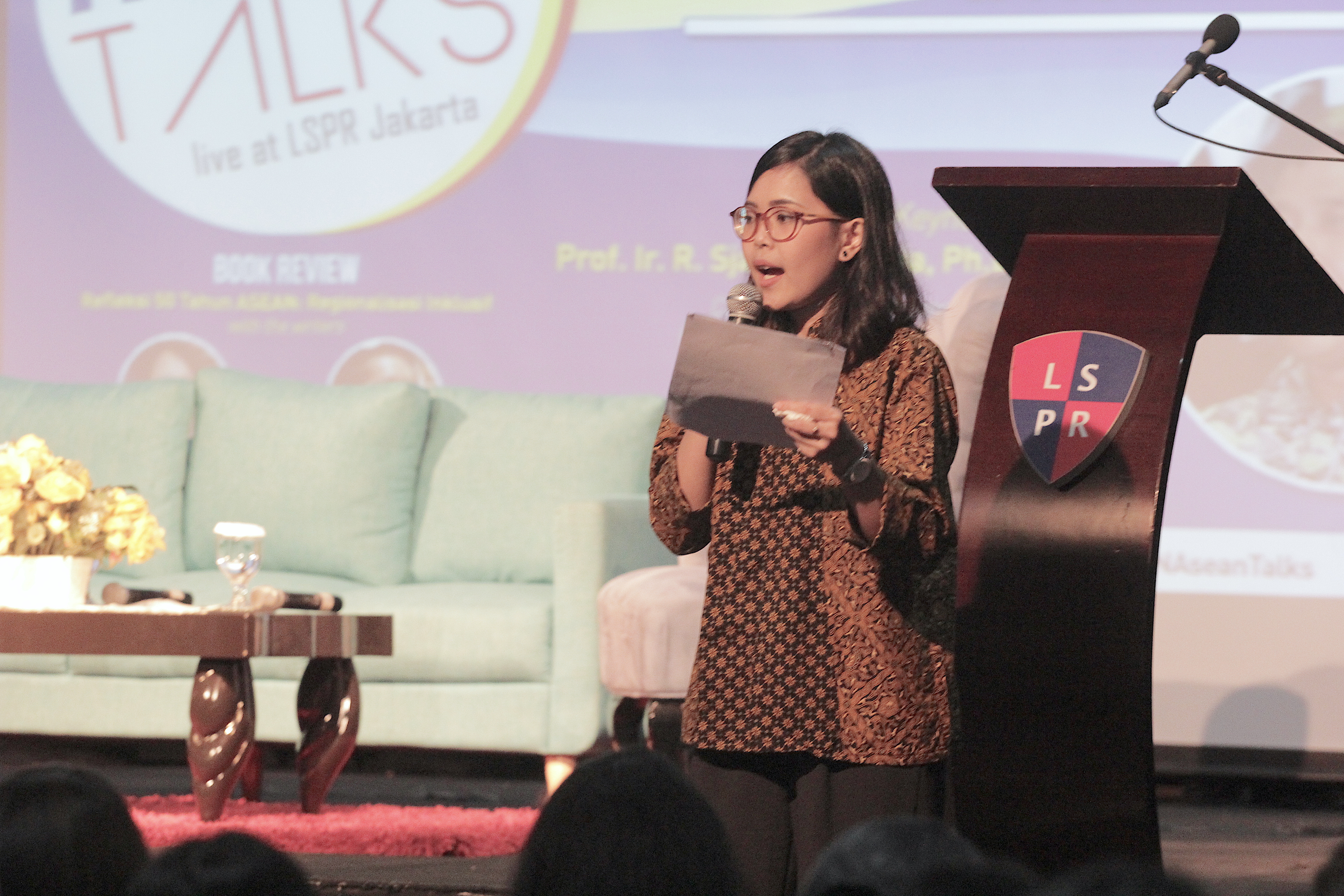 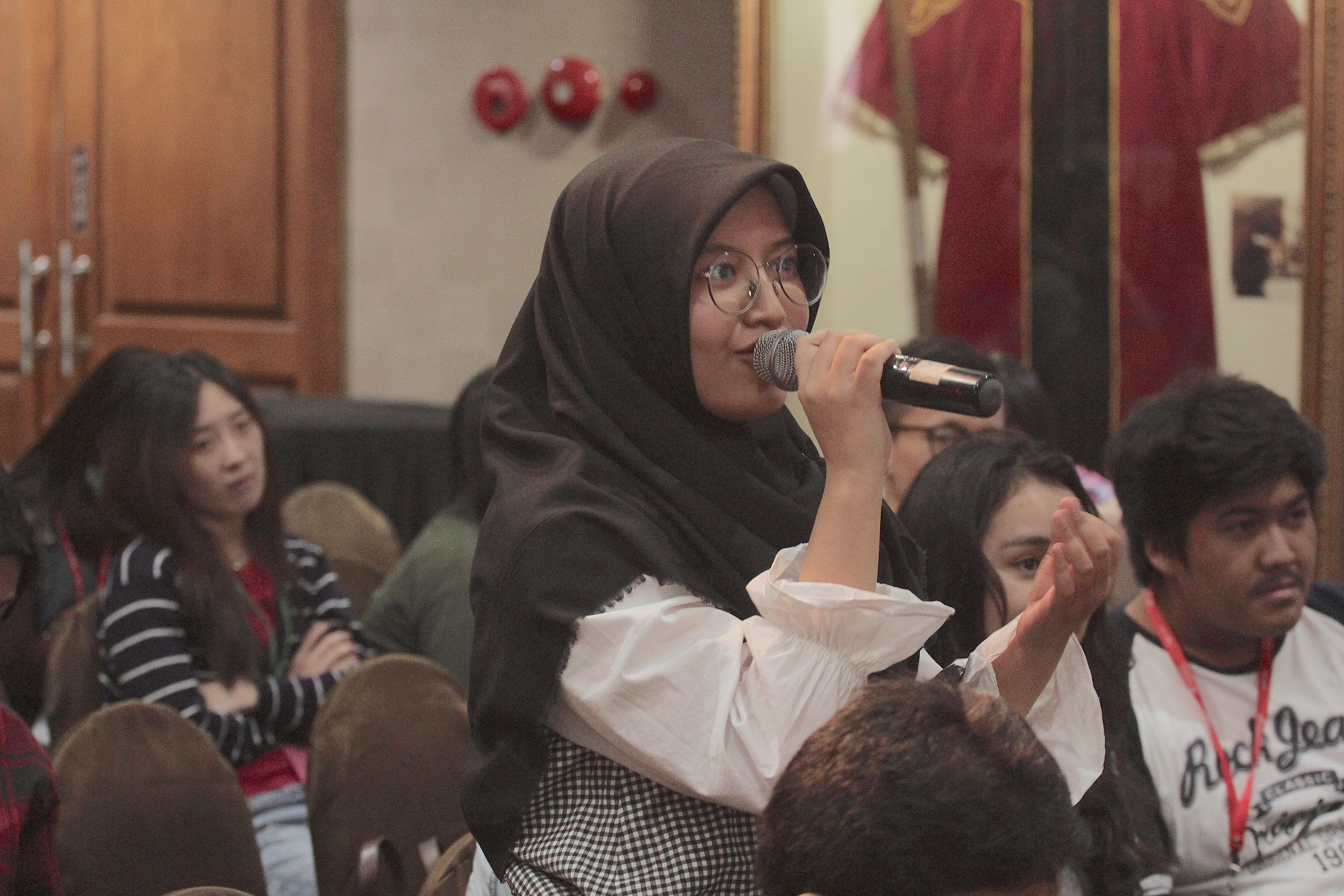 The audience was excited to learn more about maritime and ASEAN whicht can be seen from the number of questions asked in the event. 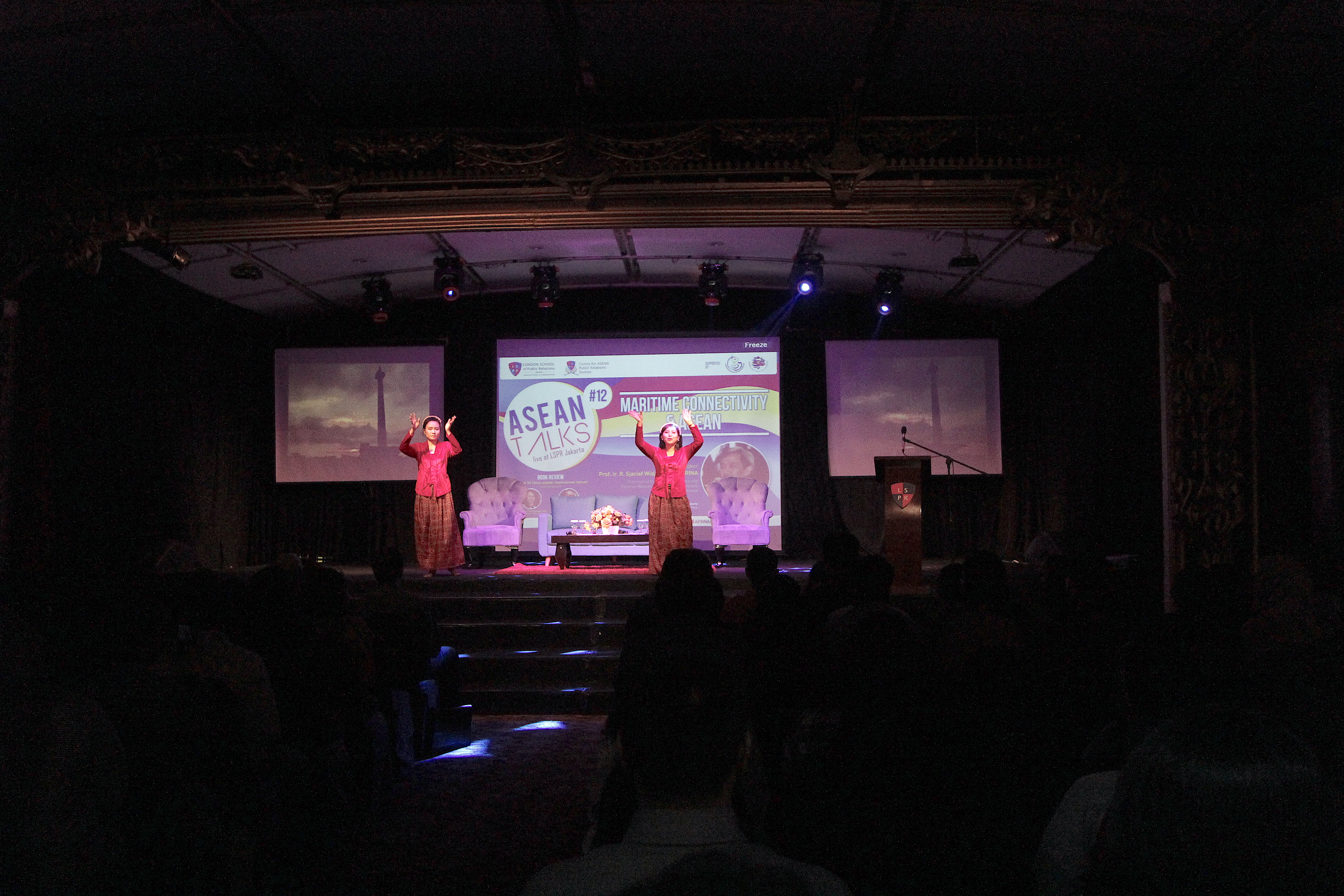 While ASEAN Talks #12 was opened with Indonesia Raya song and Kicir-Kicir traditional dance performance by Ms. Emilya Setyaningtyas and Bella Ayu Prasetyo as the representative from Indonesia who just got back from ASEAN Youth Camp in China on 7-14th October 2018, this event was closed by token exchange to the speakers.